Member of the American Board of Trial Advocates (ABOTA); AV Rated Preeminent™ 5.0 out of 5 by Martindale Hubble; California Super Lawyer by the Los Angeles Magazine (2014 – 2020); admitted to the Bar of the Supreme Court of the United States.

Paul K. Schrieffer is the founding partner of the firm. He is an active trial lawyer in courts throughout California and has litigated cases in states throughout the U.S., including Pennsylvania, New York, Washington, Colorado, New Mexico, Arizona, Kentucky and Hawaii. Mr. Schrieffer acts as national monitoring counsel for Underwriters at Lloyds and London companies in multi-district federal court litigation, as well as in state courts. Mr. Schrieffer has tried complex, high exposure cases for many clients during his 25-year career, ranging from insurance bad faith and broker E&O to wrongful termination and catastrophic personal injury, wrongful death and construction. He has also represented event cancellation and contingency insurers nationally and internationally, including legal matters arising from such tours as Michael Jackson’s “This Is It” concerts in London, England, Kanye West, Foo Fighters World Tour, Taylor Swift, Madonna, Christina Aguilera, Kings of Leon, Nicki Minaj, The Beastie Boys, YES LLC and Live Earth Concerts. Mr. Schrieffer represents Tech and Cyber insurers throughout U.S. and in the London market and regularly represents NBC, Universal Studios, AIRBNB, Postmates and other Fortune 500 companies in litigated matters and key companies and individuals in the entertainment industry.

Affiliations past and present:

Lord, let me be able in argument, accurate in analysis, correct in conclusion, candid with my clients, and honest with my adversaries. Stand beside me in Court so that I will not, in order to win a point, lose my soul.
— Sir Thomas More 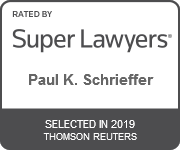